Home We Have TWO Baby Loons

We Have TWO Baby Loons 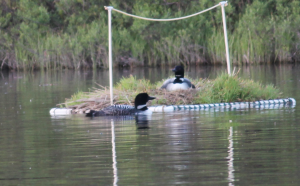 Calling all loon lovers! Yup…sure enough, the other baby entered our world of Six Mile Lake sometime during the night and we are all the proud parents of TWO baby loons. The parents are hanging close to the platform for now but will be on the move soon and that’s when all of us will be needed to keep an eye on their progress. Kelly and I set up to watch early this morning and it took over 30 minutes before we could determine that the other baby had arrived as one of the parents had both youngsters under the wings.

However, two guys in a fishing boat totally disregarded the buoys, which they had floated by several times and could clearly read, and made their way right toward the two loons, the babies and the platform. I took a picture of them and then we approached them and warned them off and all that was said was ‘sorry’. We were lucky enough to have a couple approach clearly on the look-out for the loons, and we left them to watch the area. Most of the loon watchers still do not have their boats in so now we are asking anyone who does to spend some time watching the loons (at a distance) and warn off anyone who tries to approach them. This will be a busy week-end and please help out if you can. Most people are just curious and want to get a closer look so please warn them to stay back.

These birds are ‘threatened’ in the State of Michigan and they are protected by both State and Federal law. I am angry because there is no reason for these thoughtless fisherman to disregard the buoy they fished practically on top of for over 30 minutes and then head directly inside the buoy and toward the loons and the chicks. I will be turning the photograph over to the Sheriff.