Saturday, July 26th, Wildlife Biologist Joe Kaplan from Common Coast, a non-profit organization from the U.P., and his assistant Peg Comfort, Director of The Loon Network here in Antrim County, banded two of the four Six Mile Lake loons. The first to be banded was one of the chicks who will be identified with a green band #003. The second to be banded was the female adult with a white band #002. When Joe bands a loon the juveniles are always banded on the left leg with the colored band and the adults are always banded on the right leg with a colored band. The loons are then banded on the opposite leg with a silver U.S. Fish & Wildlife band so each loon has two bands. It was quite an exciting night and we had a good crowd on hand. Lots of photos were taken. Unfortunately, on banding night the loon family, for the first time, moved about a mile south of the location they had spent the last few weeks at and so it was a long haul down to try to catch them. By the third trip they knew what was going on and disappeared into the night. The next night they were right back at their original location like nothing had ever happened. Unfortunately, the two remaining loons will not be banded unless a new time can be arranged and it doesn’t look promising. On the bright side, we have another loon pair that has been spending quite a bit of time on the south end of the lake. They showed up a few days ago in front of our house. One is banded on the left leg with an orange band. Could it be one of the babies raised here almost three years ago? Until we get lucky enough to see the number it will remain a mystery but it’s a nice thought to think one of our first babies have returned to Six Mile Lake to start life over again. Should you wish to make a donation to the Six Mile Lake Association for loon banding please be sure to mark your check ‘loon banding’ and thank you! 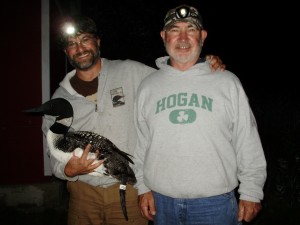 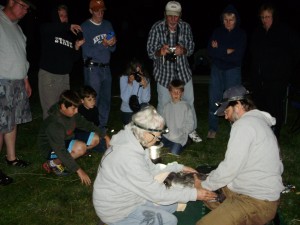 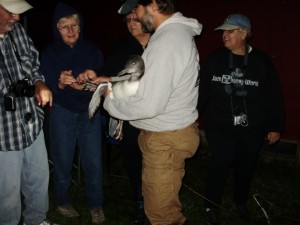 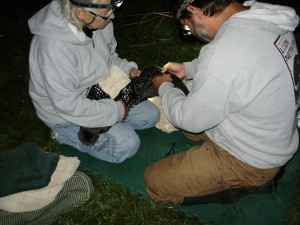