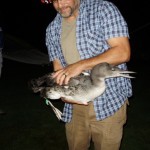 Saturday, August 22nd, 2015 one of the juvenile loons was banded with a green band marked ‘KW’ by wildlife biologist Joe Kaplan and his assistant Peg Comfort. The other juvenile was spotted but later could not be found. The adult female, who was banded last year with a white band, returned this year to successfully raise another pair of chicks on the north platform. We suspect she is with the same mate and banding would confirm this but he was not banded last year and, once again, this year managed to disappear into the night along with the other juvenile. Not to worry, all four were spotted together numerous times this past week with both adults continuing to feed their almost grown ‘chicks’.

Enjoy our loons now because too soon they’ll be packing their bags (along with the orioles, hummingbirds, and robins) and heading south for the winter!