Summer Of The Loons

Summer Of The Loons 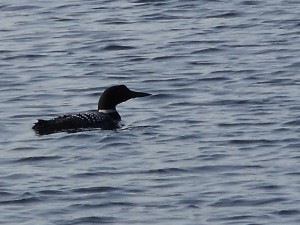 In the fall of 2011 the Six Mile Lake Association invited Bill Truscott of Intermediate Lake to speak about the Loon Network’s efforts to re-establish loons in Antrim County’s Chain-O-Lakes Watershed. For many years Bill has built and placed artificial nesting islands (ANIs) on Intermediate lake and has five there now. A total of 55 chicks have hatched from Bill’s effort.

In the spring of 2012, Kelly Hogan built and installed two ANIs on Six Mile Lake, one on the north end of the lake and the other at the south end. Within three weeks Six Mile Lake had it’s first resident pair of loons nesting on the north platform and thirty days later those loons produced two chicks. The summer of 2012 was a very special one for the residents and visitors of Six Mile lake for this loon pair were like no other. These loons were very “social” birds. They actually liked people and patrolled the entire perimeter of the lake showing off the chicks, interacting with boaters and fisherman, swimming up to docks, and parking themselves in the middle of the lake on busy Saturdays so that skiers had to go around them. We heard them yodeling and calling at night and we heard the “oohs and aah’s of boaters seeing the loons and their chicks for the very first time and every time after that.

Six Mile Lake Association members raised enough money through donations to be able to participate in The Loon Network’s banding program and wildlife biologist, Joe Kaplan, along with assistant Peg Comfort from the Loon Network banded both chicks and “Blue” the father, who it turned out, was one of the biggest loons banded on the Chain. In the fall, all four left for the Gulf Coast, their winter headquarters, and we all waited for Spring and “ice out” hopeful to see “Blue” ( the color of his leg band) return and raise two more loon chicks. But he did not return. And neither did Antrim County’s oldest rsident loon, a 23 year old male from Clam Lake. That fall over 1200 dead loons floated up on Lake Michigan beaches alone…victims of the deadly botulism poisioning that claimed almost one third of Michigan’s loon population in 2012.

Since then a new resident loon pair have set up house-keeping on the north platform and this will be the second year in a row that they have produced two loon chicks. The adult female was banded last year along with one chick and we are hoping to band her mate and both chicks this year. We are again asking for donations to help out with the costs.

Please consider sending a check to the Six Mile Lake Association, Box 421, Central Lake, MI 49622 and be sure to earmake it “loon banding” or you can send a tax deductible donation directly to The Loon Network, P O Box 117, Alden, MI 49612. For an in dept look at loons on our Chain and why we band them visit www.loonnetwork.org and thank you.

Summer of the Loons 2015 coming soon!