Home Loon Platforms Are In!!!

Loon Platforms Are In!!!

This is to let you know that Kelly and I put the platforms in at 4:30 pm on April 24. I have included photos of what each platform looks like. The north platform is in front of the Cesaro property and the south platform bisects the Stephanic/Wottowa properties. As we were towing the south platform across the lake from our place where we had constructed the nest we were followed by a pair of loons whom we believe are last year’s resident pair. 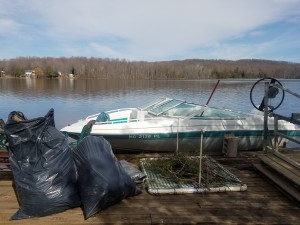 Before we got back to our house they were both up on the platform. That is a new record!!! By way of information, we don’t place the buoys marking the nests until the loons take up permanent residence on top of the platform and it’s obvious eggs have been laid. We know this because a loon will remain on the nest almost all the time once incubation starts.

Here is some helpful information about loons for our new members. Six Mile Lake is host to two platforms but there have been loons visiting here for twenty years at least. Loons do not build nests. They move up onto shore and will lay eggs anywhere suitable which means predation from raccoons, fox, eagles, etc. is high. Loons legs are short and located to the rear of their bodies which makes walking on land difficult but they swim underwater at breakneck speed. 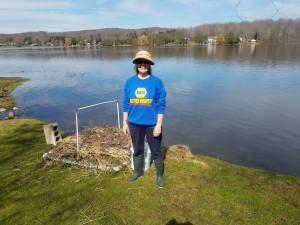 Their main food is crustaceans and small fish. They do not mate for life but the north pair have been here since 2014. The south female is a banded Intermediate Lake loon ejected from her territory in 2014. She has been here ever since and has had three different mates. Off and on throughout the season,  you will see several loons ‘visiting’ our established pairs. They will swim in circles, dive, run across the water, call to and at each other, synchronize swim and finally be escorted off the lake by the breeding pair. These loons can be relatives or offspring or newbies snooping around to size up existing territories. This can cause a lot of commotion and a lot of noise. Loons have three distinct calls…the wail, the yodel and the tremolo and they all mean something different. Parents and chicks hoot softly to each other. 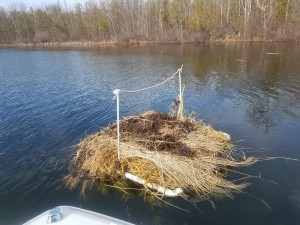 But the north and south pairs have produced chicks every year. Loons only lay two eggs. Both loons take turns incubating the eggs which takes 28 days.

The first chick will hatch and then usually within 24 hours the next one will hatch. The youngsters are tiny and cannot dive the first two weeks. They will ride on their parents backs usually under the wings. The parents feed them 24/7 and the chicks learn everything from their parents. Around August flying lessons begin. By early September one of the parents will leave and a week later the second parent leaves. The youngsters remain another month and then they leave also and head out to several loon gathering places around Michigan before heading to the coast of Florida. It is in their southern range where mature loons lose their bright black and white plumage and look like their gray offspring. They will regain their brilliant black and white plumage before they return to their breeding grounds in the north.

The youngsters will remain in the south for three years before they, too, return to their natal breeding grounds and only the males will return to where they were born. The females go to new areas where they will try to find mates and set up their own territories. There is always competition between the young loons and the already established older and stronger mature loons but eventually an older loon will be ejected by a younger loon or by a partner that chooses another mate. This is how our south female came to Six Mile Lake. She was banded in 2010 by Common Coast biologist, Joe Caplan and every year, Damon McCormick, another Common Coast biologist, visits the Chain-O-Lakes to determine who has returned and where they are on the Chain. Both adult loons on the north platform are banded and this will be the sixth year they have occupied that territory. 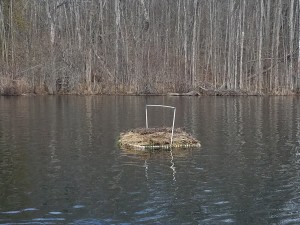 Common Coast partnered with Peg Comfort’s Loon Network and Bill Truscott who was the first person to attempt placing artificial nesting platforms or ANIs on Intermediate Lake. The program, which has successfully brought back loon populations to northwest Michigan through the use of the ANI, is a key area where Common Coast can track loons. Six Mile Lake Association joined in this effort in 2012. Our first attempt at placing a platform resulted in ‘Blue’, our most famous and most social loon, setting up housekeeping with his mate, successfully raising two robust chicks, all the while socializing and interacting with every homeowner and boater on the lake. He was pure joy to watch, probably because it was our first real experience with loons but also because he wasn’t shy about sharing his family with all of us. Sadly, 2012 was the year avian botulism claimed the lives of thousands of loons….over 1200 dead loons washed up on the shore of Lake Michigan alone. We never saw Blue again but joyfully one of his banded chicks showed up three years later on a small private lake near here. 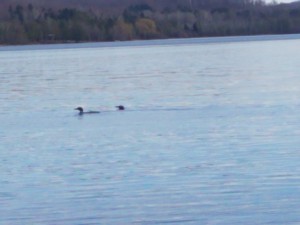 So, that is the history of our Six Mile Lake loons. The Association has raised all the money for banding through member donations so please consider a contribution. We are hopeful banding will take place this August if conditions are right. Otherwise, you can help out by keeping an eye on the loon families, making sure boaters don’t get too close or jet skiers aren’t harassing the families or kayakers aren’t floating up on the platforms. Please stay outside the buoys if you see the loons on the nest. They are only on the nest 28 days and both nests and buoys occupy about 300 feet each of a ten mile shoreline. After the chicks are born we pull the buoys from the south platform as that family does not usually use the platform again, however, we do leave the north buoys in until just after July 4th because that family does reuse the platform. 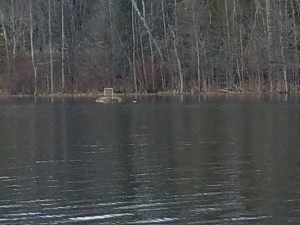 I hope all this information has been helpful and I wish to thank all of you for your dedication to the loon program. It’s because of you that this program has been such a success on Six Mile Lake! I hope the loons and their haunting calls to each other will always be a part of the fabric of life on Six Mile Lake.