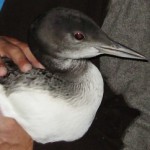 Loon banding will take place this Saturday August 22nd at 10pm somewhere on Six Mile Lake. Our loons have moved from their usual spot in front of Barger’s on the northwest side of the lake down to Daniel’s on the east side of the lake just north of Walker’s Landing. Before we can know where we will band, we will need to locate the loons first. We have three staging areas; Barger’s, Daniels, and Maxwell’s on the northeast side of the lake way up by the Natural Area and at the end of Nelson Rd. If you are interested in attending text my cell 231-676-9969 and I’ll give you a more accurate location just before the banding starts otherwise call my home 231-544-2781 before 9:30pm.

A few years ago loons were rare on Six Mile Lake. We did hear the occasional call of a loon but they just seemed to arrive in the Spring and attempt to set up on the north end of the lake (according to the residents up that way) but they’d soon disappear. With the placement of the nesting platform north of the power lines in 2012, Six Mile Lake residents were now able to enjoy a full time loon family. The first bandings took place that year…Blue and his two youngsters, Orange and Yellow, (the color of the bands) but mother managed to escape into the night. The next year, after a massive die-off of the loon population due to botulism poisoning, two young loons attempted to raise a family on the platform but were unsuccessful. The next year a new pair produced two baby chicks utilizing the platform and then cleverly escaped during banding attempts but at least this time around mother was banded along with only one chick. She wears a white band and her chick a green one. She is the mother of the two chicks that were raised this year and the biologist, Damon McCormick, who knows every loon on the Chain believes she has the same mate as last year. Our hope is to band her mate this year along with their new chicks which are almost adult size and have been attempting to fly for the past couple weeks or so. Joe Kaplan, the wildlife biologist from Common Coast, and Peg Comfort from the Loon Network will do the banding.

First and foremost, I would like to express my gratitude and appreciation to the people of Six Mile Lake for embracing this project sponsored by The Loon Network, a group of individuals whose goal is to help loon populations on the Chain-O-Lakes. Six Mile Lake members and residents have been instrumental in ensuring that our loons remain relatively safe on our lake. It is your donations that have paid for the bandings and, once again, thank you so much but please keep those donations coming! The loon program on Six Mile Lake is a very successful one with an 80% hatch rate and 100% of the Six Mile Lake chicks have lived to young adulthood and flown to their winter homes along the east coast and Gulf of Mexico. The young will remain there for three to six years and then the males will return to their natal area (not necessarily the lake they were born on) and the females will come back to a completely different area to breed. In the next couple of weeks first one adult will leave Six Mile Lake to fly south and then the other will leave. The chicks will leave in late September/early October on their long journey south. Once on the coast the adults will lose their brilliant black and white plumage and turn the dove gray similar to their off-spring.

Without the artificial nesting platforms on the inland lakes, loons have a difficult time attempting to nest along the shoreline what with the huge fluctuations in lake levels due to Spring run-off. They are also not great walkers and there’s always the threat of predators taking the eggs. The platforms float in the water off-shore and are relatively safe. The greatest threat to loons on the platforms are not the jet skis but the occasional kayakers who float right in to get a closer look ignoring the buoys warning them to stay out of the nesting area. Contrary to what I thought, turtles are not great predators of loon chicks. However, power boats are. Intermediate Lake lost five of their six baby loons this year…boats most likely the cause as the babies cannot dive for the first two weeks after they are born.

The person responsible for building the platforms and placing them on Six Mile Lake is Kelly Hogan. I go out with him to get them set up and installed and then I layer big piles of straw and last year’s grasses on the platform. We have had success with the north platform and none on the south platform. This year, we moved the south platform to Stephanic’s property on the east side of the lake about a half mile north of Echo Park and are hoping to see a second family in the Spring.

For a once in a lifetime experience, try to attend the loon banding. It’s something you will never forget! Dress warm and bring a flashlight. We’ll see you there!!!