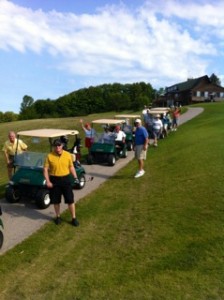 Saturday, August 24, 2013 the annual Six Mile Lake Golf Outing was held at the Antrim Dells Golf Club in Atwood, Michigan.  12 players formed 3 teams and played 18 holes of Best Ball Golf.  We had a great time at golf that included beautiful weather, scenery, and camaraderie.  Afterwards the participants and our spouses had an enjoyable meal at the club house.

The prizes were as follows:

Longest Drive on hole # 4 was won by Gus Prince

A great day for a great group.